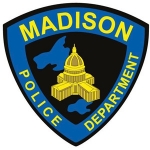 A Madison police officer and two other people suffered injuries in a Saturday night crash which happened while the officer was responding to a shots-fired call.  No names have been released.  The shooting was reported shortly after 7:30 P-M and police took three suspects into custody.  An officer on his way to the scene was involved in an accident a few blocks away.  None of the injuries were life-threatening and the victims were taken to a hospital.