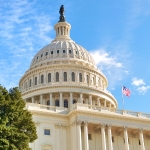 Fitzgerald says President Trump needs strong allies in Washington and he will be talking with his family and his team about the idea.  Former state Senator Leah Vukmir says she is “strongly considering” running.