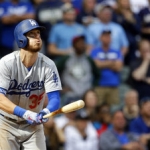 The Houston Astros popped four home runs in Tuesday’s 10-8 win over Milwaukee at Minute Maid Park.  A three-run shot by Yasmani Grandal in the ninth inning made it close, but Jesus Aguilar struck out to end the game.  Freddy Peralta took the loss after giving up six earned runs in four innings.  The Brewers maintained their hold on first place in the National League Central Division because the Cubs lost at Colorado.  Brandon Woodruff is scheduled to start tonight’s game at Houston as he tries to extend his personal seven-game winning streak.

The Brewers will try again tonight when Brandon Woodruff takes the mound. Our coverage live game coverage on 940 WFAW begins at 6:35.