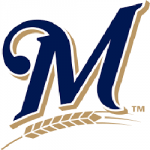 A two-run homer by second baseman Mike Moustakas in the 14th inning led the Brewers to a 6-3 victory in Houston last night.

Milwaukee starter Brandon Woodruff matched the Astros’ Justin Verlander for seven innings.  The Brewers won for the fifth time in six games despite striking out 24 times — 15 of them against Verlander.

The Brewers are off today– then send undefeated Zach Davies against the Giants in San Francisco Friday.