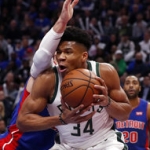 The MVP on the basketball court is the MVP in the nation’s hearts, too.

Giannis Antetokounmpo was not only named the Best NBA Player at the annual ESPY Awards presented by ESPN and ABC; he also walked away with Best Male Athlete, topping Patrick Mahomes of the Kansas City Chiefs, Mookie Betts of the Boston Red Sox and pro golfer Brooks Koepka.