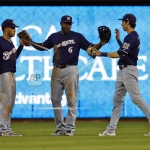 Yasmani Grandal’s two-run homer in the seventh inning highlighted a four-run rally as Milwaukee rolled past the Marlins Monday night 8-3.

The Brewers have won four games in-a-row and six-of-eight in September.

Matt Albers, who has struggled in relief lately, picked up the win.  Rookie Trent Grisham had three singles, a double and a triple in six trips while driving in two runs for Milwaukee.

Chase Anderson gets the start for the Brewers in tonight’s game at Marlins Park. Our coverage on 940 WFAW begins at 5:35.