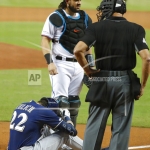 First, the good news: the Brewers edged Miami 4-3 Tuesday night in the most-costly victory of the year.

The other news: Superstar outfielder Christian Yelich broke his right kneecap on a first-inning foul ball and will miss the rest of the season.  That news put a big damper on the good feelings from the Brewers fifth straight victory.  Yelich was hitting .329 with 44 home runs, 97 runs batted in and 30 stolen bases.

The Brewers didn’t say whether the reigning NL MVP might be able to return for the playoffs that begin Oct. 1 if they make it that far. Milwaukee began the day two games behind the Chicago Cubs for the second NL wild-card spot.

Pinch-hitter Tyler Austin drove in the winning run with a sacrifice fly in the ninth inning.

Zach Davies goes for his 10th victory when he starts tonight’s game at Marlins Park. Our coverage on 940 WFAW begins at 5:35.