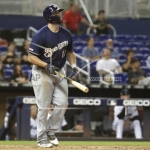 The second home run of the game by Moose gave his Brewers a 7-5 win at Miami Wednesday night.

The Crew won their sixth in a row and tied the Chicago Cubs for the second NL wild-card spot.

Brent Suter pitched three scoreless innings in relief to pick up his second victory and Josh Hader locked things down for his 30th save.

Moustakas has been slowed by injury in recent weeks, but he now has 33 home runs.

The Brewers won their sixth game in-a-row despite the absence of slugger Christian Yelich.

Gio Gonzalez starts this afternoon (Thursday) against the Marlins as Milwaukee goes for the sweep. Our coverage on 940 WFAW begins at 11:35.