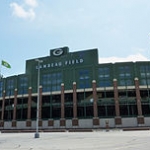 Rodgers connected on 25-of-31 attempts for 429 yards as the Packers improved their record to 6-1.  Five different receivers caught scoring passes and it was pointed out after the game that the Rodgers performance earned a rare perfect passing rating of 158-point-three.

It wasn’t a day for defense, with the Raiders rolling up nearly 500 total yards.  Green Bay plays at Kansas City next Sunday night.