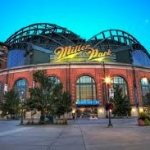 If early roster manipulations go as expected, the Milwaukee Brewers should have about 50-to-55-million dollars to use to pursue new additions.  That’s assuming a payroll of about 150-million.

The Brewers don’t have top-level minor league talent to trade, so additions to the roster will be more expensive.

If Milwaukee is going to keep players like Yasmani Grandal and Mike Moustakas, it would likely cost about 40-million of that 55-million the team has in the bank for off-season moves.