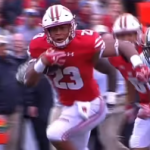 Players and coaches for both Wisconsin and Iowa will probably be watching a little television before Saturday’s game at Camp Randall Stadium.  Both teams need Penn State to beat undefeated Minnesota.

The 3 PM game in Madison is an elimination contest, with the loser having no shot at the Big Ten West title.  A Gopher loss would make things easier because the winner of the Wisconsin-Iowa game would then be only one game behind.

The Penn State-Minnesota game kicks off on ABC at 11:00 AM from Minneapolis.