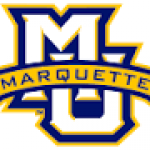 Markus Howard scored 40 points for the fifth time in his career, leading Marquette over Davidson on Thanksgiving Day 73-63.

The Golden Eagles (4-1) were clinging to a one-point lead with two-and-a-half minutes to go when Howard made a layup and hit a free throw, then added a 3-pointer to cement the victory.

Davidson had led at halftime.  Davidson failed to hit a 3-point shot for the first time in more than 800 games, dating back 25 years.

Marquette takes on USC this afternoon at 3:30 in the Orlando Invitational.