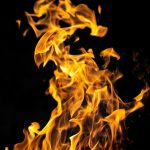 (Sun Prairie, WI)  —  No serious injuries, but emergency responders had to rescue several people living in a Sun Prairie apartment building when it caught fire Thursday morning.  Firefighters say the building had smoke alarms, but they weren’t functional.  When the first fire crews arrived just before 4:00 A-M, they say they found heavy smoke filling the first floor and had to help evacuate residents.  A ladder was used to get one person down from a second-floor balcony and firefighters say they had to force their way into three other units.  No injuries were reported.