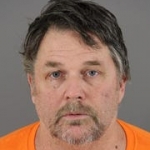 If he is convicted of all the charges he faces, a Waukesha County man could be sentenced to more than a decade in prison.

Investigators say Jeffrey Ferrick made two calls Monday claiming there were five bombs in the courthouse.  The calls were made just one hour before Ferrick was scheduled to make a court appearance on theft charges. The courthouse was evacuated, searched and cleared.

After police released a photo of a person of interest in the incident on Monday afternoon, two separate sheriff’s deputies called and identified the man in the photo as Ferrick.