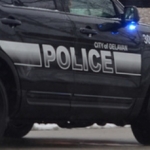 Ricardo S. Ortiz, 31, most recently of Delavan, pleaded guilty Jan. 16 to criminal damage to property, according to online court records.

Ortiz, who told police he was Native American, caused $10,361 in damage to three squad cars, the complaint states. He told police he hit the cars because of the financial problems and because “white people” took his land from him.