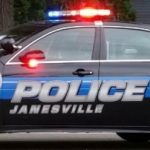 An armed man who was wounded by Janesville police during a Thursday confrontation is expected to survive.  Officers were called to a traffic accident at about 2:45 p-m.  Witnesses say the man got out of his vehicle and had armed himself with a knife by the time police arrived.  The man’s name hasn’t been released.  He was shot while he was being taken into custody, then was taken to a nearby hospital.  One of the officers involved also required medical treatment.