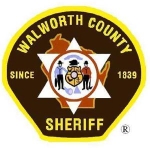 A Delavan man will spend the rest of his life in prison for stabbing his wife to death last year.  Fifty-eight-year-old Robert Scott was handed a life sentence in Walworth County District Court Monday.  Scott won’t be eligible for parole.  Town of Delavan police responded to the Scott home January 6th, 2019 after a 9-1-1 caller told a dispatcher he had stabbed his wife.  Scott was waiting in the driveway when officers arrived, telling them where they could find the murder weapon.  Rochelle Scott was stabbed more than 20 times.  She had filed for divorce the month before.