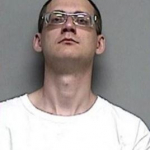 The 32-year-old burglary suspect who was wounded Monday in an officer-involved shooting has been identified and formally charged in Walworth County.  Christopher Czerpak faces charges of armed burglary, possession of a firearm by a felony and criminal damage to property.  Deputies say they shot Czerpak when he pointed a gun at them.  Investigators say he broke into his estranged wife’s home shortly before 4:00 a-m.  She hid, he ran away, and was tracked down two hours later.  The deputies who shot him have been identified as Wayne Blanchard and Peter Krueger.