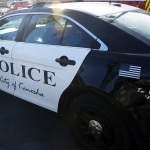 Crowds of people took the streets in Kenosha Sunday night after a Black man was shot by a police officer.  Jacob Blake was listed in serious condition at Froedtert Hospital in Milwaukee later in the evening.

People were angry when video from the scene appeared to show an officer firing several shots at close range into Blake’s back.

Police had been called to deal with a domestic incident at 5:11 PM.  Neighbors say Blake had been trying to break up a fight between two women.  The Wisconsin Division of Criminal Investigation is handling the case.